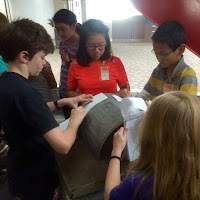 In September of 2015, our class, 7-8, from Riverbend Junior High School received the privilege to attend Edmonton Journal School. While there, we learned about several topics such as entrepreneurs, the Edmonton Journal, Downtown Edmonton and lots more! 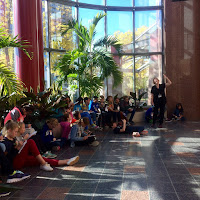 On day one of Edmonton Journal School, we got a tour of downtown. Ms. VanRiper took us across parts of Edmonton to see all of the really cool historical places and monuments. The first place we were taken to was the McDougall Methodist Mission Church, which is  extremely old and needs millions of dollars worth of repairs. Next, we went to the place where the Thistle Rink used to be. Unfortunately, the Thistle Rink burned down in 1913 with a flash of explosions. What a coincidence that the store next to it stored explosives as well. We also learned that the EPCOR building is the tallest building in Edmonton. One of the last places that we visited was the new arena being built, before we headed back. It must have been a peculiar sight to see a group of children attempting to cross the road at the same time.

A piece of the Edmonton Journal’s history was also taken in. The newspaper started on November 11, 1903, when three dedicated men from Winnipeg decided that it was the perfect time for a newspaper to grace the city. They started a small paper titled The Evening Journal and began to sell copies. Each of the men had different jobs to do. There was one reporter, one advertiser, and one typesetter. Eventually, the three men were too successful to continue running their business behind a meager fruit stand. So they constructed a building large enough to operate from. After about 40 years, the original building was torn down, and in its place, a larger, grander building was built. 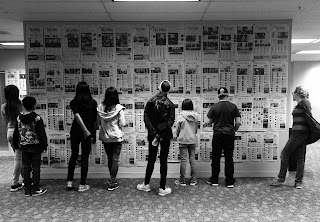 There were many meaningful things at the Edmonton Journal, but one of the most wonderful experiences that we had, was when some Edmonton Journal staff took the time to speak to us. We met Jeff Samsonow (an entrepreneur) and Jana Pruden (the Crime Bureau Chief). Each person that we met was interesting and full of information. 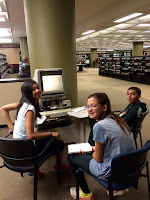 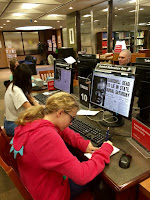 One of our favorite parts about the field trip included the “Makerspace” in the Stanley A. Milner Library. There were so many interesting gadgets, all open for public use. Some of the things we saw included a recording studio, a green screen, multiple computers and various game consoles. However, the thing that attracted our attention the most was the 3D printer, which could make things such as cones, cubes, castles and numerous shapes. Each one was coloured vibrantly, and it certainly held our attention and kept us wondering about what else we could create in the future.

After our few days of fun at the Journal, Ms. VanRiper gave us each a bag of orange, peach flavoured jelly beans. This was in celebration of the change of logo colour from blue to orange. The experience at the Edmonton Journal was truly incredible and inspiring for the seventh graders of Riverbend Junior High School. 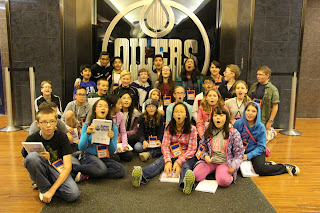 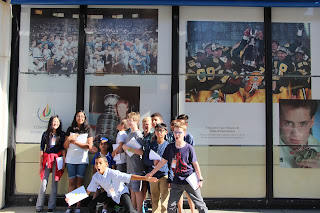 On the first day, we got the privilege to tour the CKUA building and learn about it. CKUA is a radio station located on Jasper Avenue. One of the most interesting things we got to try was making our own on air radio introductions. It was pretty cool! We took a tour around the building, and looked at how to get the least amount of echo in a studio. We also went to the basement (the library), and saw a million vinyl records, and how a turntable works. It was so vintage! We got to meet another interesting person who has admired radio, his name was Tony King. It was an amazing experience.

We also interviewed Paula Simons that day. Paula works at the Edmonton Journal, as an editorial columnist. She loves writing in opinion columns, because explaining her thoughts to other people is one of her passions. Paula also loves to debate and, in fact, she still judges high school debate competitions in Edmonton!

Another one of the activities that we got to do was a walk around downtown. During that time, we got to go to the city center mall, the old Thistle Rink location, and much more. We also got to see Roger's Place being built. One thing we learned was how to stay inside while going around downtown. We also learned about how some of the old historic sites in Edmonton were preserved. For example, The City of Edmonton kept a memory of the old Alberta Collage by leaving the archway there. 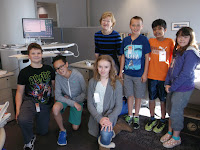 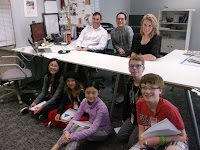 On the last day of E.J school, each group was assigned to interview the editors of each column in the newspaper and asked them questions about their jobs and what they do. Some of the people that the students had interviews with were: Margo Goodhand, (the editor) Sam Brooks and Jeff Samsonow  Capital Ideas) and Barb Wilkinson (Special Projects). Some others were Chris Zdeb, (from ‘A day in History’), and Otiena Ellwand, (Breaking News).

It was fascinating! After each group interviewed their assigned person or people, they reported back to the rest of us and we all shared information.

Also on Friday, another thing we learned was about editorial comics; pictures that represent the news story in another way.  Malcolm Mayes works for Edmonton Journal as the person who makes editorial comics. We looked at the marvelous comics to see what the message was that the author was trying to explain to the people reading the paper.

One other person we met was a photojournalist named Ryan Jackson who came to see us, with a ton of information about his interesting profession. “A lot of it is preparation.” said, Ryan. He had a few cool stories, like how he had to hang half off a cement dock, holding a cold metal railing, in the rain, to get a picture for the morning paper. One of his favorite personal quotes is “Let your feet be the zoom,” .

We took a lot from this experience. We were so lucky for this opportunity. We hope to get another chance like this again. It was amazing! 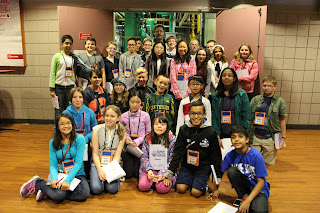